At a time when anxiety, depression and uncertainty are affecting the day to day life of everyone, the staff at Monadnock Family Services are proactively creating new processes and procedures that will allow us to continue to deliver critical services to our clients. The prudent way for us to do our part to mitigate the spread of COVID-19 is to make a large-scale change in our customary operations.

To still deliver services to our clients, the vast majority of our contacts with them will be through the telephone. Starting today and through May 1st, we have cancelled our client group sessions, have closed the Monadnock Adult Care Center in Jaffrey and continue to carefully monitor Emerald House, our transitional home in Keene until further notice. If anyone has questions about their specific service, please call our office and our staff will assist you.

Our Emergency Services department is working to meet the needs of individuals who need crisis care. It is a high priority to maintain this important service for the community.

MFS also remains committed to ensuring our staff and clients receive only credible updates and information from us about changes in our day-to-day life as these changes occur.  We will continue taking steps to minimize the risk due to Coronavirus/COVID-19 by asking all who have a fever, aches, new cough, sneezing, or other respiratory illness to remain at home and take care of yourself.

While events are rapidly unfolding, we know that New Hampshire is doing everything possible to address community needs. MFS is keeping current with State and Federal authorities so that we can provide accurate information and any available resource that comes to us.

It is important that everyone has access to reliable sources of information about the spread of COVID 19 and the steps we all can do to lessen its burden on our community. We recommend:

Men Who Cook on March 14th has been CANCELLED!

The Men Who Cook fundraiser scheduled for Saturday, March 14th in Keene has been cancelled.

Thank you for your understanding and please share this update with your family and friends.

MFS is committed to ensuring the health and safety of all staff and clients. We are taking steps to minimize the risk due to Coronavirus/COVID 19. We are asking all
who have a fever, aches, new cough, sneezing, or other respiratory illness to remain at home and take care of yourself. Please call if you need support over the phone. On behalf of all the clients and staff thank you for taking care of yourself and your community.

Click here to read our notice about a funding change from 2/18/20. 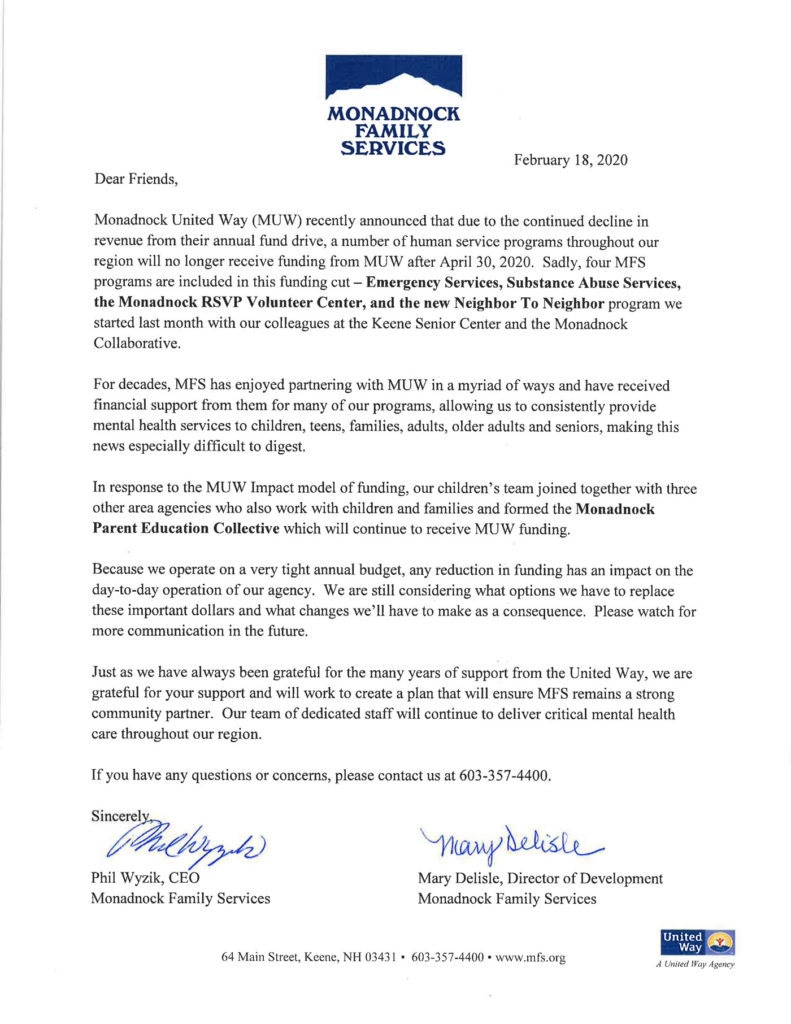 Daily Dedication: Forty Years of Service to the Community

If you were alive in 1978, you might recall that Jimmy Carter lived in the White House, that a pound of Land O Lakes butter cost $1.33 and a dozen eggs were 48 cents, or that the average house in the US would cost you about $54,000. Back then, the popular TV shows were “Happy Days” and “Little House on the Prairie” and hits like “Grease” and “Close Encounters” were in theaters. Where were you then?

David Tenney Ph.D was embarking on a four decade long career with Monad- nock Family Services. Today, this anchor and exemplar of our service to our Region is still working, teaching, contributing and growing.

Following his days as an intern, Dave became the first MFS Emergency Clinician in 1979 and has been the Department Director since 2000. He’s fulfilled many critical roles pertaining to the State’s Disaster Behavioral Health Team and critical incident management. He is an invaluable member of the MFS Senior Leadership Team.

The start of his career in community mental health was far simpler than it is today. “I believed in President Kennedy’s vision for a comprehensive mental health care for all and wanted to do my part to facilitate that,” says Tenney, reflecting on what has kept him going all these years. A man of compassion and dedication, he states that “I have always valued the role of compassionate love and held a desire to serve the Universal Spirit within everyone by extending that love to all to the best of my ability.”

That deep value found a scholarly foundation as Dave earned his Doctoral degree in 2013. “I consider my studies on love-based psychotherapy as the most important area of learning in my career,” he explains. “It’s the most essential element of psychotherapy and for facilitating optimal wellbeing; it has informed all aspects of my work here.”

In his Doctoral Dissertation, counselor Tenney defined what this means: “Love-based therapy is guided by the principle, power, and presence of a compassionate and benevolent intention to foster the client’s fullest well-being… ”

In his leadership role running the MFS’s regional mental health emergency service team, Dave and his staff have seen people face horrific psychological challenges and crises. Urgent, often overwhelming emotional distress can sometimes be fatal unless the necessary supports and interventions can reverse the powerful down- ward spiral. This is what Dave has done for decades and continues to do today.

“People are doing the best that they know how,” he says. “Sometimes, it takes a turning point in their life in the form of a crisis to realize there may be a better way. People are more able to make positive change once they have a greater acceptance of who they already are.”

He is quick to tell you how, over the arc of his career, the idealistic vision that launched the community mental health movement has given way to the business of health care and the steady decline of resources and the services they created. Still, the human spirit and it’s inclination to health remains as strong as ever. Oftentimes, it takes the support, dedication and compassion from professionals like Dave to make it flourish. 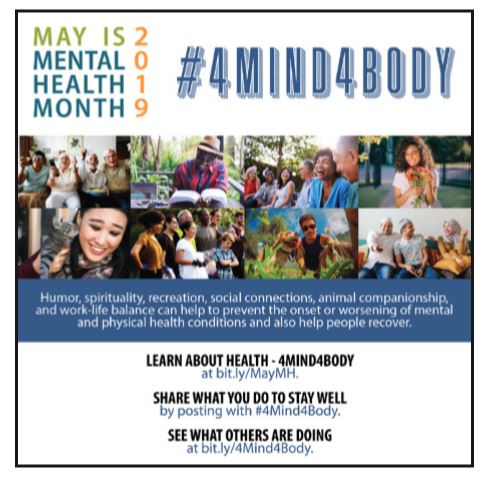 Do You Focus on #4Mind4Body?

Mental health is essential to everyone’s overall health and well-being, and mental illnesses are common and treatable. So much of what we do physically impacts us mentally – it’s important to pay attention to both your physical health and your mental health, which can help you achieve overall wellness and set you on a path to recovery. Mental Health America (MHA) founded May is Mental Health Month in 1949. That means this year marks MHA’s 70th year celebrating Mental Health Month!

MFS is adding our voice here too. We want to raise awareness about the connection between physical health and mental health, through the theme National theme #4Mind4Body. We are exploring the topics of animal companionship, spirituality and religion, humor, work-life balance, and recreation and social connections as ways to boost mental health and general wellness.

There are things you can do that may help. Finding a reason to laugh, going for a walk with a friend, meditating, playing with a pet, or working from home once a week can go a long way in making you both physically and mentally healthy. The company of animals – whether as pets or service animals— can have a profound impact on a person’s quality of life and ability to recover from illnesses. A pet can be a source of comfort and can help us to live mentally healthier lives. And whether you go to church, meditate daily, or simply find time to enjoy that cup of tea each morning while checking in with yourself – it can be important to connect with your spiritual side in order to find that mind-body connection.

MFS wants everyone to know that mental illnesses are real, and recovery is always the goal. Living a healthy lifestyle may not be easy but can be achieved by gradually making small changes and building on those successes. Finding the balance between work and play, the ups and downs of life, physical health and mental health, can help you on the path towards focusing both #4Mind4Body. 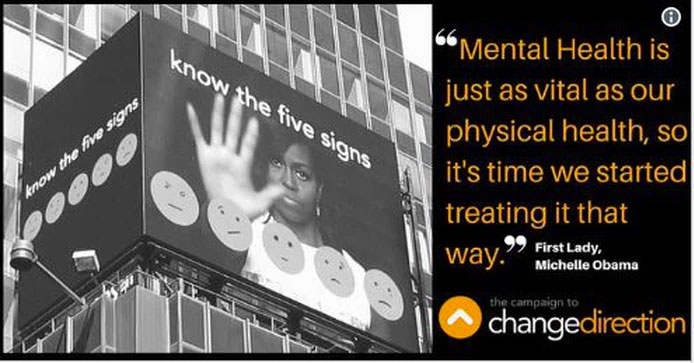 There are many approaches to teaching the general public about mental health and about taking away the stigma that haunts the field of mental illness. In the last year, Monadnock Family Services has taken one national initiative and made it more practical.

Thanks to the courageous and pioneering work of NH Former Chief Justice John Broderick and others, “The Campaign to Change Direction” came to the Granite State in 2016. Broderick, himself no stranger to the impact of mental illness on a family, wanted to make the signs of mental health distress as well known to the public as the signs of heart attack or stroke. Throughout 2017, he crisscrossed the State speaking to any group who wanted to hear his riveting message, raising money for billboards, media messages and print material, all so that a normal conversation about mental health could be a regular part of living.

The campaign to change direction is a coalition of concerned citizens and leaders from both the private and not-for-profit sector who have come together, at the instigation of child psychologist Barbara Van Dahlen PhD and considered by Time magazine in 2012 as one of the 100 most influential people in the country, to change the culture in America about mental health.

The campaign is backed by the Substance Abuse and Mental Health Services Administration and many corporate partners. Even Former First Lady Michele Obama is pitching in with public service announcements.

Paramount in the campaign is the message that there are five signs of emotional suffering that are common to many manifestations of mental health problems that surface, often long before the sufferer realizes something risky is happening.

By Broderick’s own admission, helping the public understand what they can do to assist the person experiencing these difficult emotions is less well developed. This is where the new training MFS provides adds to the Change Direction initiative. When people know five steps of how they can help, they might change the direction for the sufferer away from illness and towards health.

The MFS message is somewhat simpler than the formal eight hour Mental Health First Aid certification classes we’ve offered to the community but can serve as a useful primer to that more detailed instruction. It teaches people to learn five critical actions they can do if they want to give effective assistance:

Hold off on making judgements. Ask questions. Try to find a time and a place that makes the person feel safe and at-ease. Ask the individual to explain further. Use body language that shows concern. Listen for what the person needs.

Think as you are listening. How urgent is the situation being described? Is there a risk of suicide, self-harm or violence? Give messages to the individual to clarify what you are hearing.

Validate that the person’s suffering or problems are important. Show empathy and concern. Emphasize reasons for HOPE. Strive to be sincere and credible.

If possible, involve the individual in next steps: should they get help now, or use self-help now and later? Is ‘watchful waiting’ possible? Assist with action if appropriate. Plan to follow up and/or monitor.

Contact us to schedule a workshop for your company or group.

Support your non-profit, comprehensive, community mental health center serving the residents of the 38 towns in the southwest corner of NH.

Thank you for your donation!